In one of my projects I developed a retrospective technique that is the combination several other techniques. This technique I called the ‘bicycle game’ because of the result: a nice bicycle. Do you want to know, how this bicycle game works?

This game has two main goals:

The game can be finished in about 60 minutes.

The Bicycle game makes use of :

The agile coach prepares the game by identifying some (6 to 8)characteristics, that he wants the team’s feedback on. This might well be the shared team values that the team has defined during project start.

Prepare a spreadsheet (like Microsoft Excel), containing the criteria the number of participants and columns that calculate the minimum, maximum and average of the rates, and that plots these values in a circular graph. 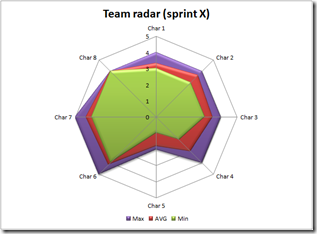 Duplicate this worksheet, and be finally creative in combining both graphs into a nice bicycle showing the average circles as wheels.

Start the game by asking the team to stand up.

Note: Other colors will fit as well.

The team members eventually decide on the best actions to take in the next sprint.

Of course the learning points of this game depends on the characteristics that are discussed. However, a very nice thing is that the participants look to their project form out an outside in perspective and that the participants have experienced not to stop thinking when they have found a cause for a problem as there might be a bigger cause as well.